Learn How Process Water can Affect a Chilling System’s Performance, and Some Basics on How to Manage Industrial Water Systems.

Water is called the “universal solvent” because it will dissolve to some degree anything that it comes in contact with. Maintaining good water quality will ensure clean heat exchangers, corrosion free piping and equipment surfaces. This will prolong the plant equipment’s life and maximize a plant’s productivity.

A Brief Discussion About Water

When a glass of water is first poured it appears to be colourless and, depending on the water source, clear and free of suspended solids.  However, appearances can be deceiving. Water contains various concentrations of dissolved minerals, salts, metals and gases.

Some of the more prevalent naturally occurring impurities in water may include:

In addition, water may also carry impurities that you can see.  These may include suspended rust (iron oxide), air-borne matter (silica based), product fines (such as PVC dust) and microbiological matter (MB).

Microbiological matter is often undetectable to the eye and unless sterilized, it will be present in all water.  If allowed to grow, it can form slime & algae masses in any systems which are very visible and can foul heat exchangers and any small orifices and water passages in piping or in molds.

1. Run-off Water: These waters originate from rainwater run-off into streams and lakes and are usually very soft in hardness and low ph. Run-off water doesn’t have the contact time to dissolve mineral scale, and the lack of hardness tends to make it more corrosive than other waters. Its purity leads to high cycles of concentrations in cooling water systems and efficient use of water and chemicals.

2. Lake Water (Great Lakes and St Lawrence River): Lake water is a combination of spring-fed, run-off rain water and water from river sources and result in water of moderate hardness and alkalinity levels. This makes for good cycles of concentrations and good water and chemical use. Softening is not normally necessary for cooling tower systems with a proper chemical program, and when not sending cooling tower water to areas of high temperature.

3. Well Water: Well water is usually very hard and alkaline. When used as cooling tower make-up water the cooling system must run with limited cycles of concentrations resulting in high water and chemical use the water is treated by softening or pH modification through the addition of acid.

In order to get a good understanding of chemical water treatment, it is necessary to define some basic terminology for water properties and the effects of each on the performance of industrial water systems:

1. pH: A numerical value between 1 & 14 which represents the chemical balance between acidity and alkalinity in water.  One represents the most acidic condition, 7 is a neutral water and 14 the most alkaline. City water sources normally vary in pH between 6.8 and 8. Great Lakes and St. Lawrence River water pH levels are 7.5 – 7.8 which makes the water slightly corrosive and practically non-scaling under most temperatures.

2. Temperature: Temperatures in these articles are expressed in degrees Fahrenheit.  Temperature is one of the most important factors affecting the one of the most common problems in water systems - the formation of hardness scale. Scale formation (Lime) preferentially occurs on hot heat exchanger surfaces. Higher temperatures will also increase the rate of corrosion.

3. Scale / Corrosion Index: Scaling and corrosion exist in a balance that can be affected by pH, temperature, alkalinity, total suspended solids and total hardness. A common method of expressing this balance is in terms of a Langelier Saturation Index (LSI), a mathematical relationship that applies the above factors mathematically to generate positive and negative numbers between +4 and –4 with negative numbers referring to corrosive waters and positive numbers referring to scaling waters. For example St Lawrence and Great Lakes water have a slightly positive LSI and can easily be treated chemically in closed systems. When used in cooling tower systems the LSI increases as impurities build up. Chemical management programs normally keep the LSI below +3 before any problems of scaling occur. However, if water temperatures rise above 120ºF the LSI will increase beyond +3 and scaling will occur.

4. Corrosion: Corrosion is a chemical or electro-chemical degradation process of metal surfaces. The purer the water, the more corrosive the water becomes. (more negative on LSI). For example deionised water is the most corrosive, followed by reverse osmosis  water, softened water, city water, and finally cooling tower water. In general, corrosion will decrease as the Ph increases and becomes more alkaline. Iron for example, will show minimal corrosion at a Ph of 8.3 and above in untreated waters.

5. Impurity Concentration:  In this article, the concentration of impurities is expressed in terms of parts per million (ppm). Higher concentrations of impurities in combination with other factors of temperature, flow, pH and alkalinity will combine to cause problems of deposition of suspended solids, microbiological fouling and scale formation.

6. Total Hardness: Total hardness is expressed in terms of ppm of Ca++ and Mg++. Under positive LSI conditions (high pH, alkalinity, temperature, total dissolved solids) these cations will combine with carbonate and bicarbonate alkalinity to form scale on the hottest heat transfer surfaces on any water system.

7. Scale Formation: Scale formation occurs in direct proportion to temperature and will reduce heat transfer in areas where it is needed most – molds, high temperature hydraulic oil exchangers, TCU’s and barrel heat exchangers.  Scale formation can be prevented by limiting the hardness in cooling water systems to below 400 -500 ppm with controlled bleed-off (unless softening is available), and chemically with scale inhibitors and dispersants.

8. Suspended Solids: Airborne dirt and dust can be drawn into a tower and cause problems of deposition and fouling, especially in heat exchangers. Corrosion products and microbiological growth from the water system can also combine and settle in areas of low flow. Tower systems concentrate the city water impurities through evaporation, and suspended solids levels must be limited by controlled bleed-off. Filtration, strainers (alarmed for pressure-loss) and chemical dispersants are used for controlling suspended solids.

9. Deposition: Deposition is the natural result of over-concentrating suspended solids and tends to occur on hot heat transfer surfaces and in areas of low flow, especially in areas changing flow. Deposition will reduce both flow and heat transfer. Cooling tower systems are especially prone to deposition due to the continuous additions of air-borne particulate by the washing of air with cooling tower water. Deposition of suspended solids can be controlled by dispersants, bleed off, and filtration.

Many types of water systems exist. We will categorize these types as being either open or closed.

1. Open Loop Systems: Dynamic systems that require a continuous addition of water to make-up for losses due to evaporation and bleed-off.  The best example is a cooling tower system.  Such a system relies on evaporation for cooling.  With evaporation, all impurities (anions and cations) remain behind and concentrate several times.  The amount of solids in the water can be limited by bleeding off the dirty water.  Clean city water is than required to make-up for losses.  For this reason, open systems are contaminated with much higher concentration of hardness, alkalinity and suspended solids.  Moreover, due to their contact with air, open systems are prone to MB growth.

2. Closed Loop Systems: No evaporation occurs and apart from some controlled water losses when molds are changed no make-up water is required. In this case, the chemistry of this water is identical to city water. Therefore, unlike open systems, impurities in closed systems will not normally concentrate unless corrosion is active and adding suspended iron to the system.

There are a number of water treatment companies that provide chemicals and services to organizations with industrial processes and heating.  Generally, most companies have representatives calling regularly on plants to test their water, calibrate any plant testing equipment and provide training. Some companies provide full service contracts to supply the chemicals, manage and be responsible for the chemical feed equipment. Additional services include laboratory analysis, on-site scale and corrosion studies & equipment inspection.

1. Closed Systems – Chilled and Hot Water Heating Systems:  Closed systems do not have the evaporation process that increases the impurity levels that are found in open cooling water systems.  For this reason, the LSI in closed water systems will remain below scaling levels, even under higher temperatures. This is the preferred water system for mold cooling.

Chemical treatment of a closed system is normally required only when the system loses water such as during mold changes.  Once the system is treated, the chemical corrosion inhibitors should remain unchanged unless the system loses water.  Testing is therefore only required once every two weeks or after system water losses such as mold changes.  If required, chemicals can be shot fed directly to the system either directly in the reservoir or in a chemical pot feeder.

2. Open Cooling Systems – Cooling Towers:  Chemicals are best fed continuously in proportion to make-up and will vary according to the actual load on the system. A contact meter, on the city water make-up, controls the chemical feed of scale and corrosion inhibitors.  As the system works harder, more water is evaporated; more make-up water is required which feeds more chemicals.

System bleed-off is a way of de-concentrating dirty tower water.  The amount of bleed-off should also vary in proportion to the load in system. This will keep the chemical levels constant in the system. Conductivity is a measurement of the amount of total dissolved solids in a system. As the load and evaporation increases, the water becomes saturated with impurities which will increase the water conductivity. A probe continuously monitors the conductivity of the water. As water evaporates the conductivity rises above a pre-set level and a bleed-off solenoid valve will open to discharge a controlled amount of cooling tower water to sewer.

The prevention of MB growth in a cooling system is handled by biocides.  These products are to be shot-fed to a system for maximum impact and fed on an alternating basis with the second dissimilar biocide.  Hand feeding is commonly done directly in tower reservoir.  However, many plants now use timer biocide pump systems to avoid plant personnel from being in direct contact with the chemicals.

In general, cycles of concentration in a cooling tower system for Great Lakes and the St-Lawrence River are kept around 3.5, assuming the suspended solids do not exceed 50 ppm. This controlled approach by bleed-off and chemical treatment will minimize water use and maximize chemical efficiency.

No matter what type of chilling system a plant is equipped with, open or closed, understanding the water in an industrial system and applying appropriate chemical water treatment is absolutely necessary. Your plant’s productivity and the life of your equipment depend on it.

Proceed to:  Water Quality Management for the Plastics Industry - Part 2 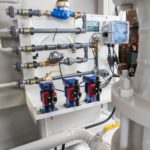 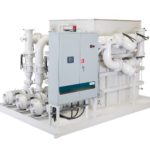 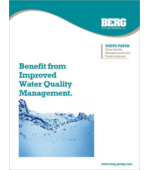 Berg Chilling Systems designs, manufactures, installs and services industrial thermal process control systems for a broad range of industries and specialized applications around the world. Over the past 40 years, we have pumped, chilled, frozen and heated our way to the forefront of global thermal management solutions.

Our product range is as diverse as the markets and industries we serve. From our Toronto based facility, we custom design, manufacture, test and integrate a wide range of skid mounted industrial process refrigeration equipment, mechanical packages and fluid pumping systems for ease of installation and commissioning.